Introduction: Replacement of β-cells by islet-transplantation can cure type 1 diabetes, but is limited by low-donor availability and the normal requirement of ≥2 donors per recipient to achieve insulin-independence. We reported that HIF-1α (Hypoxia inducible factor 1α) plays an important role in islet transplantation, but the role of ARNT and the other family members in graft outcome remains unclear.
Aim: To investigate if deletion of β-cell ARNT impairs graft outcome.
Methods: SCID mice were given intraperitoneal streptozocin (170mg/kg) to induce diabetes. Islets were isolated from donors which were either β-cell specific ARNT-null mice (β-ARNT) or littermate floxed controls. The islets were transplanted under the left kidney capsule in a ratio of (a) 1 donor to 1 recipient or (b) ½ donor to 1 of the diabetic SCID recipients. Graft function was assessed by measuring blood glucose levels (BGLs) in the recipients at least 3 times weekly. After 28 days, the kidney containing the graft was removed (nephrectomy) to exclude regeneration of the endogenous pancreas. Grafts β-cell mass was quantitated by insulin staining.
Results: In the 1:1 transplant model, the β-ARNT recipients had poor glucose control compared to both the control recipients and compared to the original β-ARNT donor mice. The β-ARNT recipients had deteriorating glucose tolerance towards the end of the study. In the ½:1 transplant model, the β-ARNT transplants completely failed, in contrast to the reasonable outcomes in the control animals. The β-ARNT grafts had lower β-cell mass as compared to its control recipients.
Conclusion: Interestingly, these data show that the outcomes for islets lacking ARNT appear worse than outcomes for islets lacking HIF-1α. ARNT is also the obligatory partner for HIF-2α and AhR (aryl hydrocarbon receptor), and lack of ARNT also inactivates these transcriptional complexes. Further work to understand the roles of HIF-2α and AhR in transplant outcomes is needed. 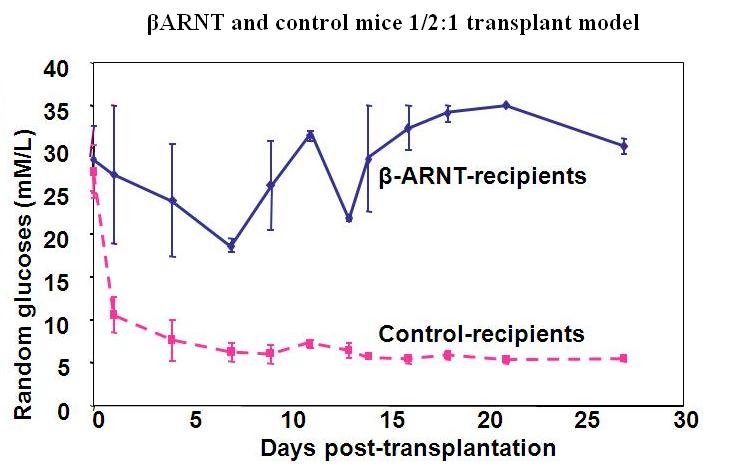